For those who might have never heard the name Tinos, let me introduce you to a Greek island, located north in the Cyclades complex. A bit overshadowed by its celebrity neighbor i.e Mykonos, Tinos has remained in the non-scene for many years. 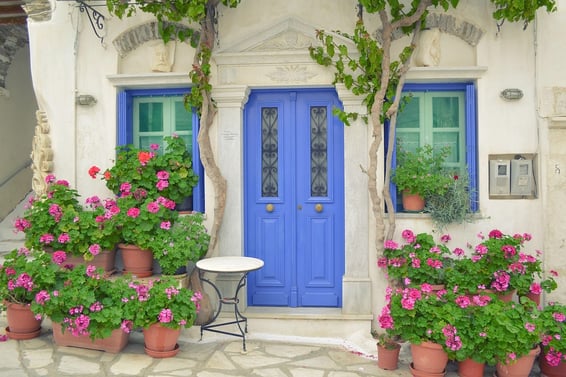 Tinos is the epitome of Cycladic coolness, an island embodying what loads of travelers seek nowadays: comfort! If you are looking to hole up in a sun-bleached, pale white hotel with low-key charm and enjoy crazy delicious food then Tinos is a perfect choice. Apart form the real personality, the funky groove, the medieval charm and the smart sophistication, there is another major reason to visit this island:

But the case of Tinos is somewhat different. It is not solely about the quality of the material but the long tradition and craftsmanship of the locals. Art is a state of mind for Tinians, shaped by the creatives and the artistic spirits of the island, through the centuries. After all, Tinos is the birthplace of Greece's most notable sculptors and painters, such as Giannoulis Chalepas, Dimitris Filippotis, Giannis Gaitis, Nikolaos Gizis, Nikiforos Lytras and many more.

The island is flanked by slobs of this amazing raw material. When in Tinos, l spied many churches and chapels with amazing marble accents. En route to the marble villages of Exo Meria, I realized there is a School of Fine Arts operating for years in the island. Most of its residents are former graduates. The School is now run by the friendly and smiling Leonidas Chalepas, descendant of the sculptor.

Our fist pit stop was the atelier of a young and talented artist. His name; Michail Saltamanikas. His work; exceptional. He talks about marble and his pieces with a touching affection. It is one of these moments you realize that if you don't love what you do then everything is just pointless. His kind eyes lighten up every time he tells the story behind each piece and how he lost the track of time when working on it. If you have some cash to splash, his original pieces worth very cent!

Next stop in this fascinating experience was the Museum of Marble Crafts. 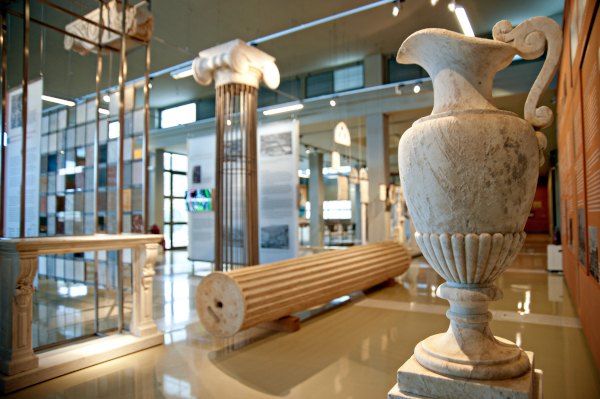 Sleek and modern, the museum is an ode to this noble material. Audiovisual presentations and installations will show you how the material is gathered, processed and transformed into art figures,statues, doors, even stadiums!

I loved the entire Pyrgos village with its sculpted birds and flowers and the Museum of Tinian artists. Traditional and authentic, the museum is a real tale of the many Tinian artists, the way they used to work with the marble, their history, their love for their art. "You are not allowed mistakes when it comes to marble" the museum guide states. Harsh but true. 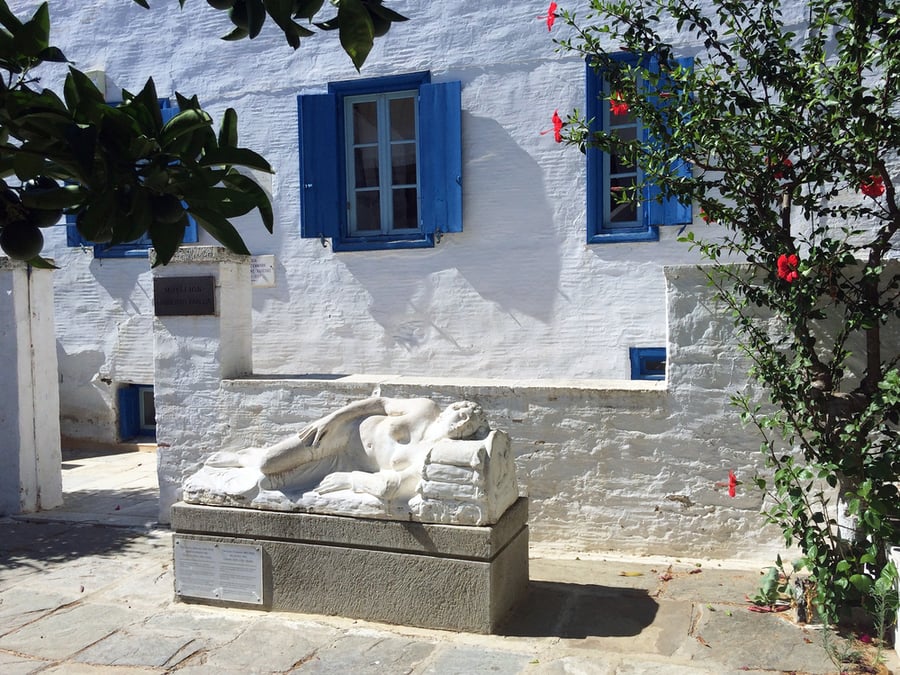 He was Greece's most notable sculptor and a leading art personality despite his turbulent life, his unnecessary committal to the mental hospital of Corfu and the frenzy prevention from creating by his own mother. I saw people sob to its story. A great artist, a suffering man, a depressed but not lost soul. His only alley, his only savior is art. Paying respects to this great man is a must when in the village.

Spare some time to stroll around the village, living and breathing this long tradition. From the doors of the houses, the meandering streets even the pharmacy sings, marble is everywhere! Pyrgos square was made for epic unwinding under a central, massive, sycamore tree and the island's best galaktoboureko!

All the eternal love I have for truffles