What makes Santorini a wino and foodie heaven? A nutritionist explains

Santorini was born out of a volcanic eruption around 1600 BC and became a land bearing great gifts for the generations to come. What was previously one island became an archipelago of five islands, of which Santorini, a.k.a Thira, is the largest one. 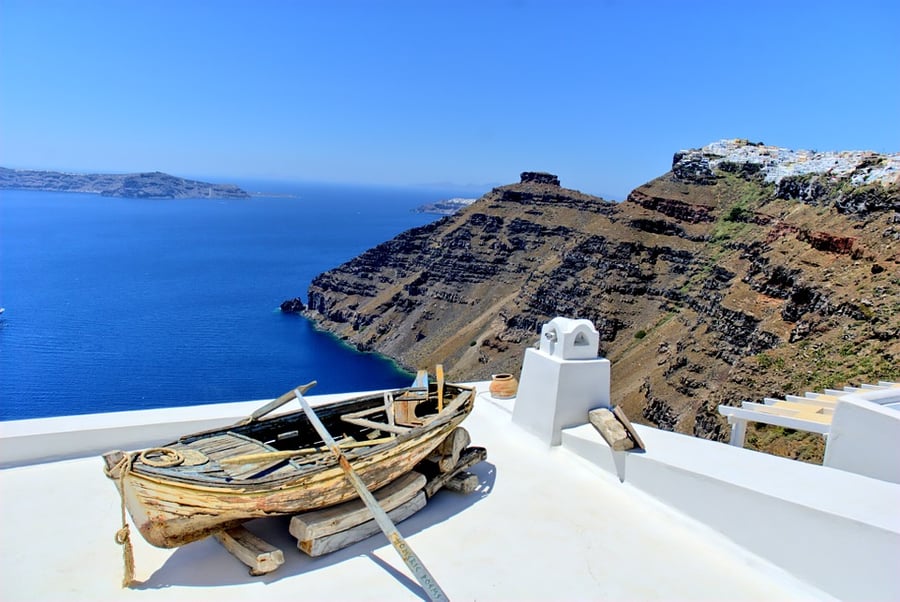 It is often said that the world’s greatest wines are made where the vine struggles. The unique terra of Santorini, this arid Aegean island, beaten by winds and sand, with almost no water and soils, gives birth to amazing wines. Native varieties Assyrtiko and Vinsanto are some of the world's most distinctive and unique wines from self-rooted vineyards, some of the few left in the whole world. The island is covered in volcanic ash, lava, slags and pumice stones, creating unusual soil conditions that grows tasteful and sweet vegetables. Minerals contained, such as iron and the deep roots of the vines - aging at least 4 to 5 centuries- give minerality to the grapes along with the salt from the Aegean sea breeze that sprays the leafs and the pumice stone in the surface, all offer perfect conditions that require minimum water. However, the dominant Aegean wind—known as Meltemi, is an integral part of Santorini’s unique ecosystem, helping to lower the temperatures and allowing slower ripening of the grapes, or the veggies that grow in the island. The winds are the trademark of Aegean, and make wine producers to prune vines in low bushes and around wreaths making them look a little bit like bird's nests. 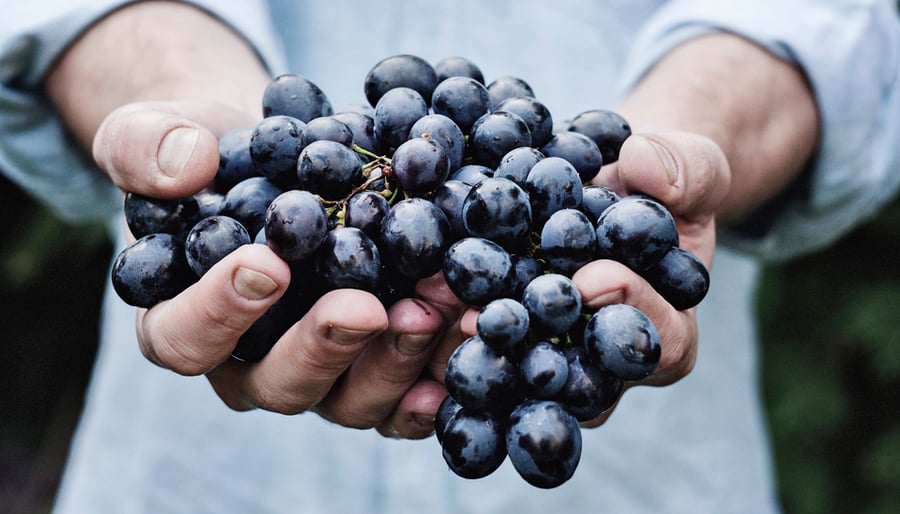 Santorini's P.D.O Assyrtiko is one of Greece’s most fascinating and unique indigenous grape varieties. These wines are born from the indigenous Assyrtiko grape, cultivated in some of the world’s oldest vineyards, dating back 3.500 years. It contains flavors and aromas of tangy and crisp citrus. Santorini’s sweet Vinsanto variety comes from ripen vines that after their harvest stay out in the sun to dehydrate and concentrate all their flavors. Both wines reflect the unique volcanic and anhydrous soil of Santorini. 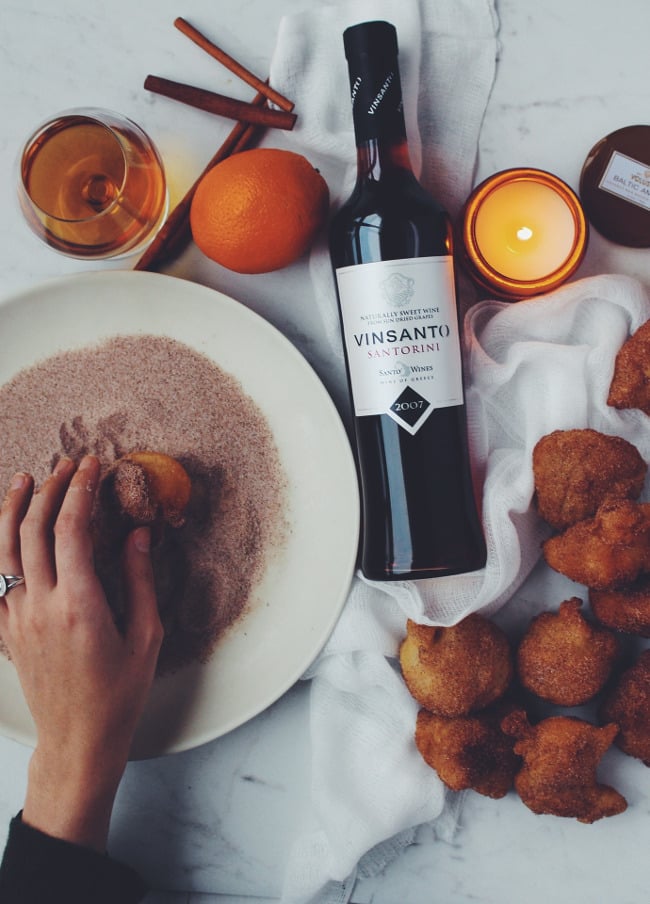 Of course, nothing beats a trip to Santorini. The captivating beauty of its natural environment is something that needs to be experienced firsthand to be fully appreciated. Same applies to the local cuisine. Sardines from the Aegean sea, meze (meaning small bites) with olive oil & oregano, cucumber & yogurt, crabs and shrimps giouvetsi with frumenty are some of the musts. Oysters make a delicious match with capers and katsouni, a slightly different kind of cucumber named after the inhabitants of Santorini. It is smaller, thicker, cooler and lighter than the common cucumber and has fewer seeds. It is a necessary ingredient in the traditional Greek salad, plus it makes a great Greek spoon sweet which is perfectly combined with Greek yogurt.

Some important Greek food facts are the Vitamins C & K, magnesium, potassium, manganese and nutrients that can be found in all veggies growing in Santorini. Eating them unpeeled provides the maximum amount of nutrients. Just remember: Wash thoroughly! They also contain antioxidants, including flavonoids and tannins, which prevent the accumulation of harmful free radicals and may reduce the risk of chronic diseases. The wines’ depth and complexity also allows for more creative twists. Think of seared sea scallops with garlic and lemon scented Santorini Fava. Is also a P.D.O product that has been growing exclusively in Santorini for more than 3,500 years. Santorini Fava has very high nutritional value as it is rich in proteins and carbohydrates. The traditional production method, includes drying under the sun and aging which results in velvety texture and the slightly sweet taste. It is also known as Split Peas! You can find it in every traditional tavern of the island as an appetizer, served as a velvety purée. It is often garnished with onions, herbs and local capers. Wild Santorini Caper, also a P.D.O is a bush born in the volcanic soil and lava stones.

Caper berries and leaves are rich in vitamins and antioxidants and have a unique spicy flavor. Dishes that come with capers are fishes like Litsa (a local variety of tuna) or grouper fish in the oven with herbs and tomato sauce or casserole.

Make sure you engage in a unique gastronomic experience when in Santorini. Uniqueness in a a sense that it cannot be found anywhere else in the world, such as chloro for example- a special type of soft, mild goat cheese. The Santorini white eggplant, is a rare type distinguished by its white color, shape, rich flesh and fruity and mild flavor, much sweeter than the common purple eggplant, with much fewer seeds. It can be tasted in many forms and it is a must when on the island. Seek it raw in salads, fried, as a delicious paste called melitzanosalata and, of course, as the main ingredient in the famous Greek specialty, moussaka. Although often considered a vegetable, it is technically a fruit, as they grow from a flowering plant and contain seeds.

Another Santorini specialty, that any visitor should definitely taste is the tomato fritters, available in every tavern from an anhydrous tomato called Tomataki Santorinis, another P.D.O.

Santorini tomato is one of a kind! 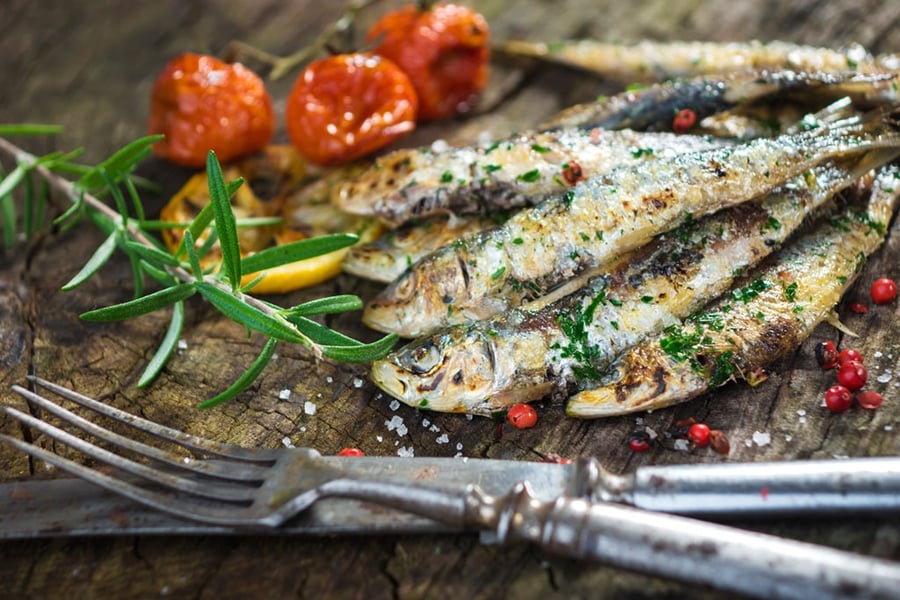 It is small-sized, sometimes no bigger than a cherry tomato! Under its thick skin, it reveals a concentrated full body with sweet taste and intense aroma. Only Santorini Tomato, can give tomato paste as rich in antioxidants. Santorini tomato can be consumed fresh in salads, sun-dried, canned, as a tomato paste or even as a spoon sweet.

What fascinates wine lovers and foodies in Santorini is the fantastic diversity and tasteful traditional dishes that ooze ancient history.

Nothing is conventional in the terra of Santorini!

A foolproof guide on how to stay in shape while traveling

10 Romantic Activities to do in Greece